Janet Bergman always psyched when
she’s on any big wall!

Mountain Hardwear athlete Janet Bergman will be guiding throughout the 2011 Ice Fest!  Janet will be teaching some killer intro & basic ice climbing clinics Friday & Sunday and a WOMEN’S specific course on Saturday- so you have your pick!  Janet Bergman loves all realms of climbing, from long alpine rock climbing in the mountains, putting up new routes, has a strong passion for bouldering, and also loves to get out and play in the White Mountains during the winter.  Janet is widely known for her wonderful personality and humbly inspires others with her passion and talent for climbing.  Thus, Janet is an awesome guide, and if you’re interested in ice climbing and want to learn more, her clinics are the one for you!
Call the IMCS office asap to signup:  603-356-7064 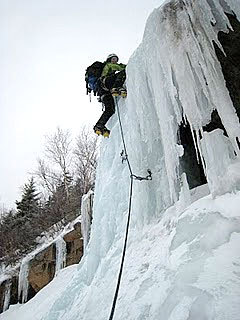 Janet Bergman having fun on a steep section of Landslide Gully.