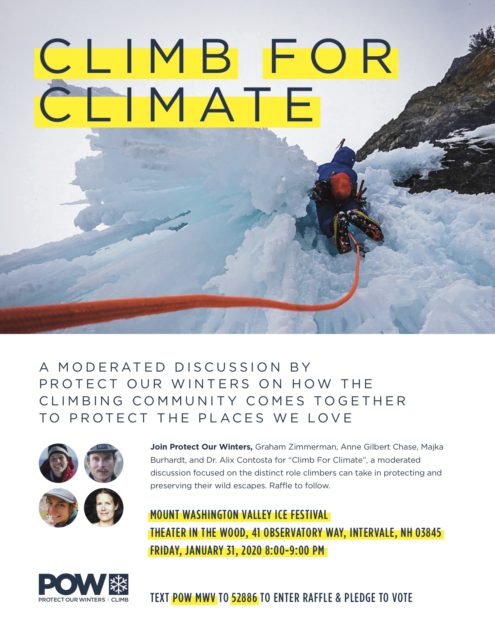 We’re psyched to let you know about a new addition to the Friday night event line up.  After Jon Walsh’s feature presentation, we are stoked to host a Protect Our Winters Climate Panel.

Protect Our Winters’ mission is to turn passionate outdoor people into effective climate advocates. They bring together a community of athletes, creative pioneers, and forward-thinking business leaders to affect systemic solutions to climate change.

Graham Zimmerman, Moderator Thirty-something male. Heavy drinker. Of coffee. Sporter of Moustache. Enamored with alpinism and the experiences, challenges and relationships that come from it.

Born in New Zealand raised in the Northwest. After being exposed to alpine terrain in the Cascades he moved back to NZ where he cut his teeth in the Southern Alps and became a strong part of the Kiwi climbing community. Then, after graduating from university in 2007 he moved back to the states and has been focused on climbing as it applies to alpinism ever since. This has taken him on expeditions from Alaska to Patagonia to Kyrgyzstan to Pakistan and all over the lower 48 and Canada where he has established numerous new routes on rock, ice and snow.

Anne Gilbert started rock climbing in college, but it wasn’t until she moved west to spend time in big mountains that she fell in love with every discipline of climbing. Since then she’s climbed around the world, including India, Patagonia, France, Spain, Alaska and Canada. She calls Bozeman, MT home where she works as a registered nurse at the local hospital.

Majka is the Founder and Executive Director of Legado, an international organization working to protect the world’s most threatened mountain ecosystems by empowering the people who call them home. She founded Legado to address the growing need to create conservation solutions that put mountain people at the center of preserving the world’s most biodiverse mountains— the water towers of our world.

Majka lives in New Hampshire with her husband, Peter Doucette, and their twin children.

Dr. Alix Contosta is a Research Assistant Professor at the University of New Hampshire’s Earth Systems Research Center. She studies winter ecology and the winter-to-spring transition, especially the ways in which climate change impacts terrestrial ecosystems during the so called “dormant season.”