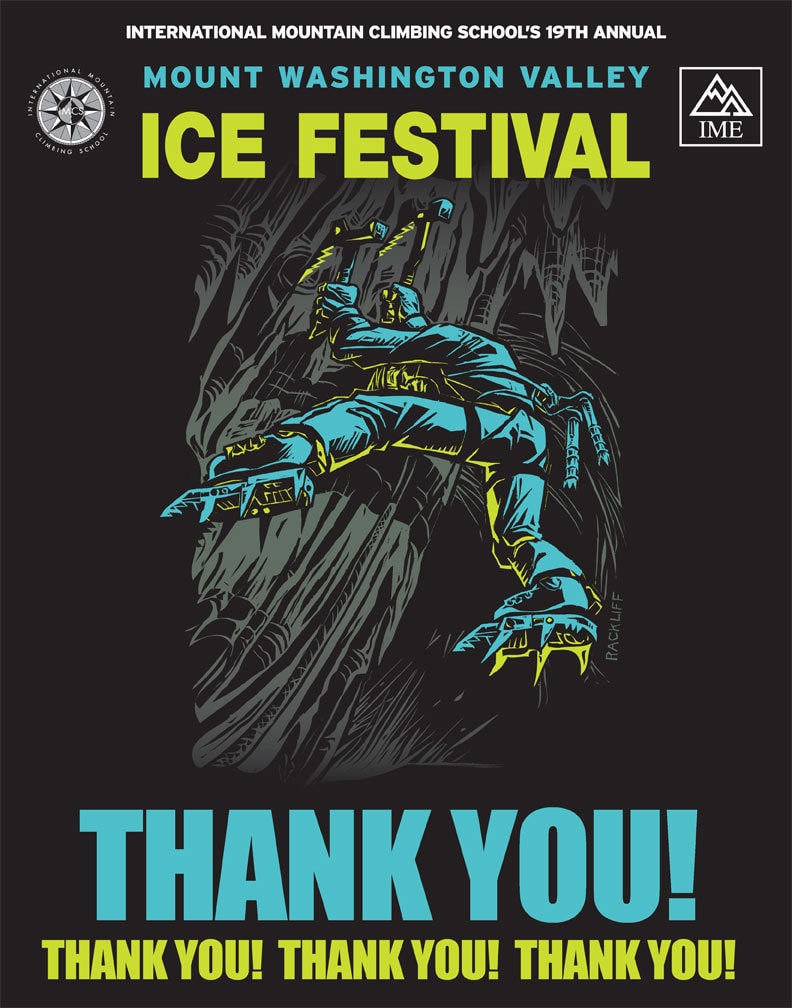 This years Ice Fest was our best ever but it only happened with so many helping hands, talent, and passion.

First, we want to thank all of YOU!  All of you who have a passion for ice climbing, IME/IMCS, the MWV Ice Fest and having a gosh darn good time!  So thank you to ALL of the participants who took clinics, for ALL of you who checked out the demo’s, for ALL who bid on the American Alpine Club Silent Auction which helped them raise $2,000+ for the Live To Dream Grant!   And ALL of you who came to the evening festivities at the Cranmore Climbing Wall on Friday & Saturday nights!  We do it for the climbing community whether you come from near or far- we hope you had a blast…..that is our ultimate goal!

Next, we want to thank all of our sponsors!  This would not, and could not happen without our AMAZING sponsors.  First, our headlining sponsor Outdoor Research for their level of support.  Their positive energy and supportive personnel just blew us away and helped make the visions for the 2012 Ice Fest a reality.  In addition Sterling Rope, La Sportiva, LOWA, and Patagonia all committed at an incredible level that help make Saturday & Friday evening festivities and the comp the best to date!  But ALL our sponsors made this event special and possible, including:  Petzl, Grivel, Beal, Mountain Hardwear, Julbo, Nemo, Mammut, Scarpa, Black Diamond, Wild Things, The North Face, Rock On, Jetboil, Harvard Cabin, The American Alpine Club, NeIce.com, Neclimbs.com, Randy Rackliff from Cold Cold World, Rock & Ice, Tuckerman Brewing Co, The Good Loaf, Frontside Grind, Flatbread, Cranmore, and The Nereledge Inn!

We ask you to think about the companies and organizations listed above that you saw this weekend- and if you liked what you saw or tried during the weekend we encourage you to buy local.  Buying local in the Northeast supports the Reps that came, and we believe it’s important to support the small climbing outdoor shops that have a lot of heart and soul- and of course one that hits close to home  to us is IME.

Additionally, big thanks to Sterling Rope for sending out Will Gadd who gave a killer show on Friday night that had 300+ people laughing and awe struck as well.

The filmmakers & athletes hat made the Saturday night Ice Fest Film Fest a huge success we want to send a huge thank you to!  This was a series of short films that were made by Granite Films, Emilie Drinkwater, Graham Zimmerman, & Petzl.

Next, we want to thank all those who volunteered their time, energy, and hard work out of the kindness of their hearts.  We gave special recognition to Doug Madara this year as he put in an insane amount of hours throughout the ice fest.  There is no doubt the Face Off Comp would not have happened at the level of success without Doug.  In addition we want to thank Josh Hurst and Jim Ewing who set the comp routes for the Ice Fest Face Off Competition.  Josh drove all the way down from Bar Harbor Maine to help set our best comp routes to date and Jim from Falmouth, Maine.  Other people who we want to thank personally for their time are Nickie Sekera, Susan Ainsworth, Megan Blackburn, Jim Surette, Sarah Garlick, Brian Threlkeld, Paul Clifford, Katie Dott, Sam Bendroth, Andy Knepsheild, Tim Keenan, Bayard Russell, and the AAC volunteers, who all donated time to help make this event so incredible.   Also, those who helped move the ladder during the comp, Jim Shimberg & Jay Dufresne for belaying during the comp, and anyone else that helped in some way or form.  We heart you.

Of course we want to thank all the IMCS guides and our guest guides as well.  We were just blown away by the top caliber guides we had for the 2011 Ice Fest.  Our guest guides this year included Janet Bergman, Emilie Drinkwater, Matt McCormick, Kevin Mahoney, Ben Gilmore, Majka Burhardt, Silas Rossi, Bayard Russell, Freddie Wilkinson, Matt Shove, Mark Synnott, Jim Shimberg, Andrea Charest, Art Mooney, and Nick Yardley.  Wow!  What a stellar line up we had this year!

Next we want to thank our IMCS intern Krissy Boucher.  She helped us a bunch throughout the weekend!  Thanks girl!

And of course, our assistant event planners Ashley Link & Naomi Risch were undeniably incredible.  Plain and simple- whatever it was they got it DONE.  To us, they were two angels sent from the heavens!  But these two were always right with us or one step ahead of us, and were a vital key player in making the whole weekend such a success!

Freddie Wilkinson was our amazing MC that has the place intrigued and laughing!  We were so psyched that he joined us again this year.  Thank you Freddie!

Big thanks to all Ice Fest Face Off Competitors that came from near and far!  We had some new ladies in the line up, which totally rocked!  We also had some new men in the comp, and Ivan Tighe came all the way from Vermont to throw down.   Janet Bergman & Kevin Mahoney both ultmiately took first place in the comp!  Congrats & nice work you two!

Mon Voyage Neon rocked the house Friday night for the Face Off Competition and then again during Saturday evenings festivities.  We will keep our fingers crossed that this awesome DJ will join us again next year!

Dave Kelly (Ashley Link & Sasha Eisele) who really helped keep the IMCS office and clinics in order during registration- a  daunting and challenging task as we had 120 clients go out on Saturday!

Finally, we want to thank Rick Wilcox and Brad White who trusted us with the amount of time we put in, our visions, and our requests of them.  Rick has seen this Ice Fest happen for 18 years and Brad for 10+, and to put it into our hands with all the faith, trust, and support they give- is absolutely amazing.  Thank you Brad & Rick!