This year is the 20th Mount Washington Valley Ice Fest, and was started back in 1994 by Rick Wilcox.  Rick has been the owner of if IME since 1979, and yes, he is a legend here in the Mount Washington Valley, but he is more than that.  He is a father figure to hundreds, perhaps thousands in the climbing community.  People near and far know they can come to IME at and level experience and seek advice on weather, climbing conditions, gear, and even life advice.  The Ice Fest Crew has a whole lot of love for Rick Wilcox, as he got the ball rolling in 1994- the oldest Ice Fest in the country (that we can find)!

We asked Rick to give us a write up about the very first Ice Fest in 1994.  He has a better memory than most people, but you see a correction or addition that needs to be made, please let us know, and contact us.

“I worked as Jeff Lowe’s assistant at Frankenstein for a clinic with twenty participants, and I was in charge of putting up the top ropes.  At the end of the clinic a participant asked Jeff how he’d climb the vertical column just to the right of the cave on Standard Route.  He decided to show them.  He put one screw at the base of the column an proceeded to climb the entire sixty foot column without another screw.  Obviously if he fell, it would have been a ground fall.  When he was back down on the ground, the participants were shocked, and asked him why he did so.  Jeff Lowe answered, “I didn’t want to waste any energy putting in screws.
The tools of the day were the the Lowe Alpine Big Bird Axes and Hummingbird Hammers.  The tubular pick was the hot set up (until you hit a rock!), and Lowe Alpine Foot Fangs we also a hot ticket.  Of course, one piece suits were in.  Docstein Mittens we’re the gloves of choice, and helmets?  Well, barely anyone wore helmets back then.
Elvio’s Pizza catered the event at Cranmore, and of course everyone snuck in beer!
We did meet in the mornings upstairs at IME, just like we do today.  There were about 5 sponsors that first year, but that got the ball rolling for all the future years.  It would be hard to list everyone who attended or was apart of that Ice Fest, but if you were a climber in North Conway, you were there.  Here is my attempted list of people there:

Thanks Rick! We hope you were able to step back in time with Rick’s account there, and then think about where we are with the Ice Fest now! Pretty cool, with a whole lot of heart and soul! And dang, those folks were bada$$ back then! Get psyched, and we hope to see you in just over a week at the 20th ICE FEST! 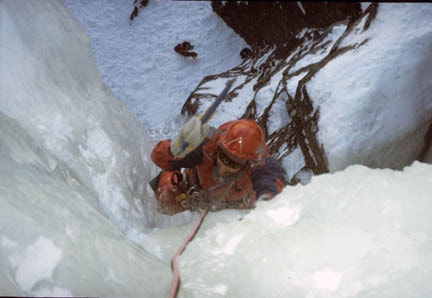