This morning we are very excited to announce that the Mount Washington Observatory will be joining us at Ice Fest this year!  The OBS is a staple of the winter-in-the-Whites scene, providing us with one of the most important resources we have for planning our adventures – the forecast!

While scientists began exploring and observing winter on the summit of Mount Washington in 1870, the Mount Washington Observatory itself was founded in 1932 and has been forecasting and keeping records ever since.  Only two years after its founding, scientists in the Observatory recorded the famous 231 mph gust that stood until 1996 as the fastest wind gust ever recorded on the surface of the Earth.

The Auto Road Stage Office was where the Observatory was first established.

The weather station has been staffed continuously since 1932, with crews taking hourly weather observations that are reported to the National Weather Service for use in regional forecasting.  With this long-standing tradition of data collection, the Mount Washington Observatory holds one of North America’s longest continuous climate records.

Today, the mountaintop weather station remains the core of the observatory’s work, but in addition to the weather and climate research it conducts, the OBS also focuses heavily on science education and interpreting the region’s heritage.  Perhaps most importantly to us climbers, they issue a daily forecast for the Mount Washington region and the High Summits.  An incredible resource! 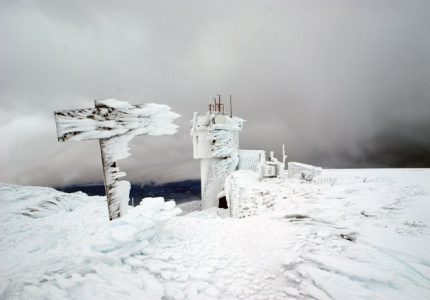 As you make your way through registration at this year’s Ice Fest, be sure to check in with the folks from the MWOBS.  They will be at IME with a live stream of the summit weather, and will have all the information about what to expect from the elements out there!