It’s time to celebrate the guides of the International Mountain Climbing School – the regular cast of characters that can be found guiding and exploring in the White Mountains on a daily basis.  These folks have logged an incredible amount of time in the mountains, at the crags, and on the backcountry ski runs that the North Conway area is known for.  They’ve been there both personally and professionally, and going out climbing with any one of them is always a treat.

Paul McCoy came to North Conway in 2002, inspired by the mountains and their limitless playgrounds.  Whether it has been tied in to a rope, or clicked into a pair of skis, he has explored every nook and cranny of these hills.  His experience isn’t limited to New Hampshire though – Paul has climbed extensively throughout the American West, as well as in New Zealand, Australia, and Spain.  In 2008, he started guiding with IMCS, and has been a staple to the scene ever sense.

Zebulon Jakub is known for his fascination with the technical components of climbing.  The dude is a treasure trove of information, and in an alternate universe, he probably exists as a brilliant engineer!  In addition to being a stellar skier and climber, he is also a super experienced paraglider and snow kiter.

Craig Taylor has been working as a guide in the Mount Washington Valley for 25 years.  In that time he has become well-versed in all forms of guiding and has served as an advocate for the profession.  The dude is psyched on guiding and is a proud father.  An excellent and knowledgeable instructor, Craig will be teaching one of the weekend’s Learn to Lead courses.

Justin Guarino is a recent addition to the IMCS team, but we’re psyched to have this big-mountain crusher on the roster.  Justin’s experiences with high-end alpine climbing in the Great Ranges give him an impressive background to pull from when guiding and climbing here at home.  And although he’s new to IMCS, he’s been around the Mount Washington Valley guiding for the last 5 years. 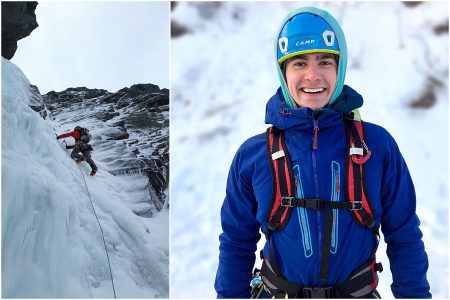 Tyler Allen is another new name on our roster, but he’s already been great to have around.  The dude is solid and psyched, and it’s easy to see that Tyler is a great teacher.  When he isn’t guiding, Tyler is a researcher at Dartmouth College who focuses on understanding the regional geology of East-Central Alaska and the Yukon Territory.