Ready to learn from the best?  We are excited to announce Freddie and Janet Wilkinson will be guiding with Ice Fest this year! We are so pumped to welcome this powerful climbing duo on board!

Janet crushes on rock and ice, and is an accomplished alpinist.  Janet is known for her adventures world wide, but some of her favorites include ‘The Nose in a Day’ in Yosemite Valley, putting up ascents in India, and exploring new cliffs on the southern coast of Newfoundland. It doesn’t stop there! Janet is alway searching out was to give back to the community and the planet! She has worked with Kismet Rock Foundation, taking underprivileged kids climbing and most recently served as the executive director of the Northeast Organic Farmers Association!  You can get out and climb with Janet all three days! She will be instructing Ice Climbing 101 Friday and Saturday, and on Sunday check out her Ice Climbing for Rock Climbers Course. Janet is also sponsored by La Sportiva, Petzl, and Mountain Hardwear! 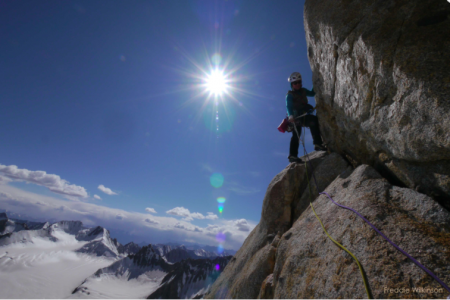 We are so psyched to have writer, climber and all around entrepreneur Freddie Wilkinson back on the team! Freddie has significant first ascents around the world! He has received both the Robert Hicks Bates Award from the American Alpine Club (2007) and the Piolet d’Or from the Groupe de Haute Montagne (2012) for his achievements in the mountains!   Freddie is also a La Sportiva, Julbo, Clif Bar, Sterling Rope and Mountain Hardwear Athlete! Psyched to get after it with Freddie?  You’re in luck!  He will be teaching Friday’s Intro to Steep Ice, and Saturday’s Steep Ice Clinic. Sign up soon!