Ryan lives in Northampton Massachusetts and has been guiding in the United States, mostly in the northeast, for more than a decade and he is a AMGA Certified Rock Guide. Ryan has spent the past three years gaining additional training as an RN and recently graduated an accelerated bachelor of science in nursing program at UMass Amherst. As a climber he has really focused on winter climbing and he has climbed extensively in the Catskills in southern NY and in the fjords of western Newfoundland. Ryan has established several first ascents in both areas over the past ten years. As a guide he is really focused on providing high quality instruction that helps guests learn comfortably and easily.
Ryan Stefiuk’s Clinics: Friday: Intro To Steep Waterfall Ice Climbing Skills/  Saturday: CAMP’s Intro To Steep Waterfall Ice Climbing Skills/ Sunday: OR’s Mixed Climbing 101
JIM SHIMBERG 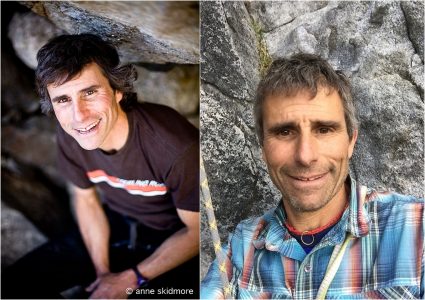 Jim shim, the Hebrew fossilized guide (he wrote this!), has been teaching rock and ice climbing since 1984, and lives with his wife Dawn and daughter Rose Montana, in Campton NH.  Shim (as his friends call him) has been at it for the past 33 years! He’s been all over the world and has his name all over guidebooks for both rock and ice across New England. He’s a legend in these parts for both his rock and ice skills, but also for just being one of the most wonderful people in the universe.  Did you know Shim made the first free ascent of the grade 6 ice climb ‘Call of the Wild’ at Lake Willoughby Vermont in 1995?  This was the first grade 6 ice climb in New England!  Called the “Custodian of Cannon Cliff”, Jim has cleared loose rock, developed trails and repaired poor anchors on the huge east face of Cannon Cliff, in Franconia Notch NH, for over 20 years. In addition, Shim is a Mountain Rescue Service “A” Team Member and participates in technical rescues throughout the White Mountains. He is also a Wilderness First Responder, and continues classes in medical training and rescue seminars. Jim is by far one of the nicest people you’ll ever meet. This makes him even better as a guide.
Jim Shimberg’s Clinics:  Friday: Ice Climbing For Rock Climbers, Saturday: College Ice Climbing, Sunday: OR’s Steep Waterfall Ice Climbing Skills
ERIK THATCHER

Erik learned to climb while at Holderness School where he was able to explore the cliffs in Rumney, Franconia Notch and North Conway after school. From that point on climbing has been the focal point of his life. During college he had a rumspringa in Colorado and Wyoming, but still ended up setting down roots as a Yankee in his native New Hampshire, preferring humidity, mossy rocks, buggy summers and rainy winters to the Rocky Mountain high. Erik now guides part time for Mooney Mountain Guides and works full time for Holderness School, running the same climbing program that brought passion to his life as a high schooler. Off the cliffs he can be found enjoying various other outdoor pursuits, such as playing at homesteading and untangling fly lines while watching fish swim around him.
Erik Thatcher’s Clinics: Saturday: Ice Climbing 101/ Sunday: Alpine Style Climb
TIM FARR

Tim has been passionate about the outdoors his entire life. He is currently certified as an AMGA Single Pitch Instructor and has successfully completed the AMGA Rock Guide and Ice Guide Courses. He is also certified as a Level 3 ACA Coastal Kayak Instructor. Certified as a New York state licensed Rock and Ice Guide, he is a Leave No Trace Master Educator, Wilderness First Responder and Association for Challenge Course Technology Level 1 Practitioner. He has been certified as a Swift Water Rescue Technician and has completed a level 2 American Avalanche Association course. Tim has led trips and expeditions across the country including in Alaska, Washington, Idaho, Maine, and Vermont.

Tim has been a University and College teaching assistant and instructor for such courses such as; Intro to Ice Climbing, Glacier Travel and Crevasse Rescue, Intro to Mountaineering, Kayak Rolling, Swift Water Rescue, Intro to River Kayaking, Whitewater Kayaking, Intro to Coastal Kayaking and Expedition Coastal Kayaking. While living in Alaska, he produced a guidebook to Ice Climbs in Juneau, AK and holds first ascents of climbs in the area.  In 2010, before moving to Vermont, he became a NOLS Instructor for Mountaineering.

Tim has been working for Petra Cliffs since the summer of 2011 in many capacities. He is a rock and ice climbing guide and instructor, lead ropes course and teambuilding facilitator, and membership and Staff Manager. He is also the Coordinator of Vermont’s Ice Climbing Festival; the Smuggs Ice Bash.  Smugglers Notch and Vermont has been home for the past several years and Tim has become intimately familiar with all of Smuggs’ nooks and crannies. He organizes Vermont’s Ice Climbing Festival, the Smuggs Ice Bash, and guide’s year round for Petra Cliffs in Burlington, VT. The more cold and desolate the objective or climb, the more he feels at home and in his element but Tim enjoys teaching the beginner to the advanced on all the intricacies of winter climber no matter their ability.