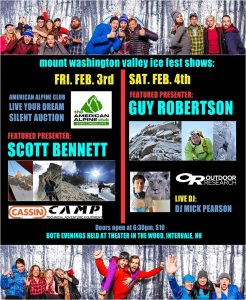 Goooood Morning Monday!  All week we will be reminding you of all the awesome elements there are to Ice Fest there are this year!  First, our evening presenters!  We encourage you to get there early and the Boogalows Island BBQ Food Truck will be there too!  So grab dinner when you arrive and then come inside for a Tuckermans brewski!  Here’s the beta!