Happy New Year, Ice Festers!  May it be a year full of cold temps, fat ice, and big sends!

To ring in the New Year, we’d like to make a big announcement about the Friday night show at the the 25th Annual Mount Washington Valley Ice Fest!  We will be showing the film, Mixtress, and Jesse Huey will be delivering a presentation!  It’s going to be an awesome night!

First up for the show will be the film, Mixtress.  Produced and directed by one of mixed climbing’s hardwomen, Dawn Glanc, the movie follows the evolution of mixed climbing and the women who have left their mark on the sport over the last 20 years.  Get ready to be inspired by steep lines, big sends, and a group of badass women!  Check out the movie’s trailer!

Next up for the evening is headliner, Jesse Huey.  Jesse is a Colorado-based climber who is a wizard of all climbing disciplines.  Being a bunch of alpinists and ice climbers, we of course drool over his tick list of big mountain routes like The Slovak Direct on Denali and The Dru Couloir Direct in Chamonix; his first ascents in Patagonia and the Bugaboos; his regular crushing of mixed routes to M11.  And in the summer, when we don rock shoes and chalk our hands, we think about him sending Freerider on El Cap, The Shadow on the Chief, or last summer’s FA of Original Sin on Mount Hooker in the Wind River Range.  Basically, this guy can crush!  But he’s more than just a hard-hitting send machine; his is an honest and real approach to the climbing game and a life spent in the big mountains.

As Jesse says, his show on Friday will focus on “my journey and experience from a lifetime of climbing ice and being in the alpine.  That narrative follows a journey that started in the Canmore region where I climbed extensively before a very successful trip to Alaska. In 2010 I climbed the Slovak Direct on the South Face of Denali which put me on a path that I didn’t really see coming.  I was then injured terribly in China and faced with a horrendous decision in Pakistan in 2013. Since then I have been climbing things that have called more to my soul, rather than to the notoriety that often accompanies an epic ascent.  This presentation will be an honest conversation about this experience; the highs, the lows, and the loss of really really amazing people along the way.”

Doors will open at 7:00 PM on Friday, February 2nd at Theater in the Wood.  Be sure to get there early to get a seat! 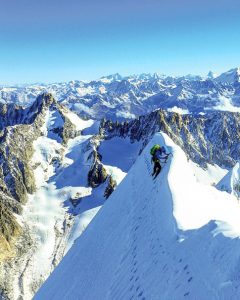 Want the opportunity to climb with Jesse and to learn some of the tricks to success in the mountains?  Check out CAMP’s Light & Fast Alpinism Clinic!  This will be a two-day clinic (Saturday & Sunday) geared towards those who already lead WI 3 and are looking to go deeper into the hills to climb bigger objectives with a Light & Fast approach.