December 8, 2018
Peter Doucette is back!  Peter is the principal guide and owner of Mountain Sense Guides.  He is not only a native NH climber, but still resides right here in the Mount Washington Valley.  Here he is perfectly poised to take advantage of the fickle weather and transitional conditions that seem to define his high-end ice climbing.  An Outdoor Research athlete, Peter literally wrote the book, for them on Thin Ice.  When he’s not training the US Military/Special Ops or putting up impossibly delicate lines here in NH, he is seeking continued education for himself as a professional guide: his certifications include IFMGA, AIARE III, and more. 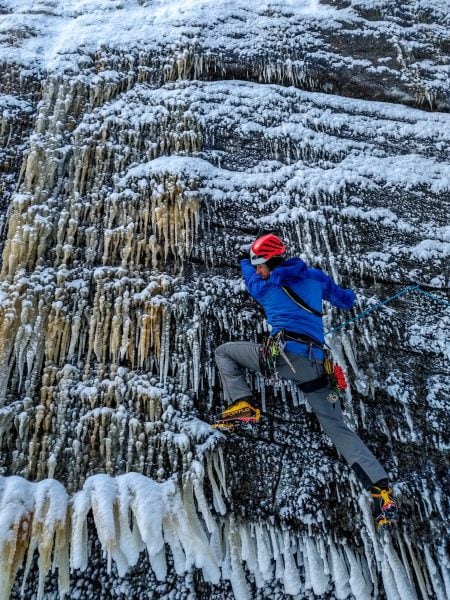 From the second edition of Yankee Rock and Ice:

“Doucette’s climbing…is that of a student who has studied a medium for thousands of hours.  He’s probably thought about how to flick an ice tool the way a violinist contemplates holding a bow. He  spends long hours scouting the notches of northern New Hampshire, where he grew up, and where he learned to climb from Franconia’s protagonists: Jon Sykes, Chris Marks, Art Mooney.  He was climbing Grade V ice before graduating high school.”