The Ice Fest crew loves this kid!!! Todd from New Jersey is soooo stoked on climbing his enthusiasm is literally contagious!   Todd has become a friend now and is listed in the cell phone as Todd from Jerz! Todd sports a 2011 Ice Fest truckers cap that is tattered and worn. True story… He loves this hat so much I caught him sleeping in his sleeping bag with his Ice Fest hat on!!  If you look closely at it you can see 2 faded signatures from some of his favorite climbers Conrad Anker, and Will Gadd. It’s his goal this year to get Renan’s signature, and he hopes to get Jimmy Chin’s sometime soon.  Anyhow we are stoked to spotlight Ice Fest participant Todd Asher Bergstein and hear what he thinks about Ice Fest!!! 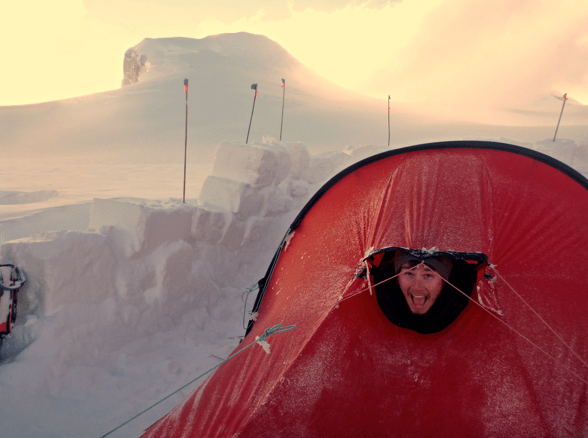 “ Yo, Todd from Jerz here. This year will be my 3rd MWV Ice Fest. It seems like each year Ice Fest gets more and more awesome. Ice Fest has been an amazing experience for me. I came to Ice Fest with virtually no climbing experience. I had one Mt. Washington winter hike under my belt. I saw a post on OR’s Facebook page about Ice Fest and made the fortunate mistake of clicking on the link. And what an outstanding mistake it was. Without being too dramatic, that mistake changed my life! On an impulse I called in sick at work and drove up to North Conway, NH. For the first time in my life I slept in my car (three nights in fact!)  I later learned that would be referred to as “dirtbagin’ it”.  I ended up taking two superb clinics my first year, Intro to Ice Climbing and Steep Waterfall Ice. The guides were friendly, down to earth, and I learned a ton! Now, three years later I quit my desk job and am currently attending The Mountain Training School, a magnificent 2-year mountain guide-training program. I went on a 38-day expedition across the Northern Patagonian ice cap, and spent two insane months rock climbing in Spain. After 2013 Ice Fest I will be heading back to Alaska for more alpine training.  If you have never tied into a rope before, or if you are free soloing WI6, check out Ice Fest this is an awesome event and has something to offer everybody! “